You are here: Home / Reviews / The Man Who Planted Trees directed by Frederic Back and written by Jean Giono: A Film Review 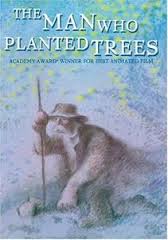 I first came across The Man Who Planted Trees while working in Melbourne in 1997. I was then employed as a values presenter in high schools. This gem of a short film unfailingly provoked both discussion and imagination among those we visited.

I must have seen this film close to a hundred times. It has never failed to call my attention.

The Man Who Planted Trees is a delightful animation that tells the timeless short story written, originally in French, by Jean Giono. This original work is a poetic masterpiece in itself. As such the film makes no changes to Giono’s text. When set alongside the work of award winning animator, Frederic Back, the result is astonishing. It certainly deserved its Academy Award for Best Animated Film.

The Man Who Planted Trees tells the story of, Elzéard Bouffier, a solitary shepherd who, in his own quiet way, plants a forest. His determination and humble self-belief catches the eye of a young man who follows this work over the decades covering the two world wars and beyond. During a time of unparalleled destruction, this remarkable man transforms a barren landscape into an oasis of life and wonder. His is a selfless task, a calling to create with no thought for gain or profit. Along the way he becomes a picture health, happiness, and contentment.

But this story is much more than an invitation to plant trees. It unfailingly raises questions of life, beauty, vision, grace, gratitude, and creativity. This is a film brimming with colour and spirit. It insists that to live is to give oneself fully in the service of others. It is a parable that gently cradles the potential to set dreams to flight. To watch this film is to risk falling into a meditation on the essence of life and service. To show it to another is to give a precious gift indeed.

I have now shown this film to youth, children, and recently to a gathering of men at my church. This is one of those very rare short films that is accessible to all ages. I sincerely hope it continues to be shown and discussed in a wide variety of settings. It deserves a broad and attentive audience.

Barefoot Follower: Inviting Reflection on the Stories of Jesus

The 'Barefoot Follower' site is a collection of passion-filled reflections, sermons, and reviews centred around the teachings of Jesus. Join me as we consider what these ancient, long-treasured documents might tell us about God and ourselves. For more information on the concept, purpose, and aspiration of the site please visit the Introduction page.

About the Site Author: Mark Beresford

All posts and comments © their original owners. Everything else is © Mark Beresford 2014. Mark's information can be reused or republished solely in accordance with the BY-NC-ND Creative Commons License. Please let Mark know if you would like to reuse any part of this site through the contact page. It is helpful and encouraging to learn how people are using the information.
Posting....